Forbearance of the Immune System during pregnancy: Fetal parasite takes an estrogenic way!

Malini Laloraya* and Renjini A Padmanabhan

Copyright: © 2016 Laloraya M, et al. This is an open-access article distributed under the terms of the Creative Commons Attribution License, which permits unrestricted use, distribution, and reproduction in any medium, provided the original author and source are credited.

Understanding the mission of managing the genetically diverging fetus as “transitory self” by the mother during pregnancy is vital in detailing the state of immunological tolerance. Hormones dictate the whole event and helps in enrolling, differentiating and altering the functions of immune cells. Estrogen the decisive hormone during embryo implantation as it activates embryo for adhesion and determines the window of uterine receptivity, along with progesterone exerts control over differentiating endometrial and immune cells. This review focuses on how estrogen modulates various immune cells to develop a uterine milieu conducive for the growth of the fetus.

Immune privilege is a phrase used to describe certain regions in the body which are able to tolerate the exposure to antigen without inducing an inflammatory immune response. It is thought to be an amendment during evolution to defend vital structures from the potentially harmful effects of an inflammatory immune response. The most widely known immunologically privileged site is the feto placental unit in the uterus. Pregnancy success continues to be a fascinating phenomenon to immunologists as it defies the immunological rules of rejection. The human embryo and subsequent fetus is a semi-allograft and immunologically foreign to the mother. Embryo implantation is an immunological paradox as the genetically different embryo is symbiotically existing with the mother, and hence, one of the most vital and captivating paradoxes of life.

The mechanism of maternal-fetal immune tolerance was explained with several hypotheses. Subsisting in absolute touch with the mother, the trophoblast and placenta invites immunological attack. Maternal-fetal tolerance is maintained by (1) the T Helper 1 (TH1) to T Helper 2 (TH2) transition showing an anti-inflammatory nature, (2) secretion of cytokines like IL-10 and other substances that constraint the invasion and multiplication of maternal natural killer cells, (3) decidual secretion of LIF which induces a localized tolerance and TH2 shift, and (4) suppressive activity by an enzyme, indoleamine 2,3-dioxygenase (IDO) secreted by trophoblast cells which destroys tryptophan required by mother’s T-cells to react to the fetus [1]. Apoptosis is essential for embryo invasion. Other mechanism of fetal tolerance include controlled regulation of T-cell proliferation and apoptosis by Fas/Fas ligand systems along with hormonal factors and cytokines [2]. Also, the Toll-like receptors (TLR) expressed on the trophoblast and placenta, hires up CD14+ monocytes to implantation site with increasing secretion of proinflammatory chemokines. Decidual NK cells are masked by extravillous trophoblast by expressing HLA-G and HLA-E which on binding to NK cell receptors like killer-cell immunoglobulinlike receptors (KIRs), CD94, inhibit killing of trophoblast cells by these NK cells. Male antigens and seminal plasma factors also contribute to uterine immune tolerance for successful implantation [3]. A contemporary discovery, T regulatory (Treg) cells, a subset of T-lymphocytes grabs all attention due to its effective repressive activity and crucial roles in curbing detrimental immune snaps and impeding autoimmune disease. Reports suggest that augmenting the CD4+CD25+ treg cells contribute to maternal immune tolerance during critical period of peri-implantation of pregnancy in mouse models [4]. In another study, Zenclussen et al. Demonstrated rescue of allogeneic pregnancy by transferring Tregs from normal pregnant mice to abortion-prone mice [5]. Also, women in the first trimester shows increased accumulation of treg cells in the decidua and the cells are elated in maternal blood when compared to early stages [6]. Scrutinizing various studies reveals that Treg cell scarcity or their functional inadequacy is coupled with miscarriage, pre-eclampsia and infertility [7].

Pregnancy is a hormone mediated affair. Steroid hormones mainly estradiol (E2) and progesterone (P4) and gonadotropins mainly, the human chorionic gonadotropin (hCG) are essentially required for the establishment and maintenance of successful pregnancy [8,9]. These hormones sustain fetal tolerance by stimulating tolerance pathways and hampering detrimental immune responses through binding to their immune cell specific receptors and/or action via mediators.

Progesterone, indubitably entitled “Pregnancy hormone” grooms uterus for implantation by inducing differentiation of stromal cells to decidual cells by the process of decidualization and also prevents uterine smooth muscle contraction [10,11]. Glycodelin A and Progesterone-induced blocking factor (PIBF) are the key mediators of immune regulatory function of P4 [12,13]. Also, progesterone helps in twisting the cytokine generation profile of CD4 and CD8 T cells by reducing potentially lethal IFN-U, TNF-α, IL-10 and IL-5 creating a more “tolerogenic” one with IL-4 secretion [14]. Human chorionic gonadotropin, the nature’s own immunosuppressant promotes fetal tolerance directly through Tregs, uterine NK cells and indirectly through dendritic cells [15,16]. Estrogen, the ruler of the female body, has comprehensive control over her physiology as estrogen receptors are present in nearly every organ and tissue. It maintains every organ systems bringing good cardiovascular function, bone health and brain function. It carries her from infancy to motherhood and ultimately puts the shutter on her fertility. Role of estrogen in regulating cells of the immune system was well demonstrated earlier in many reviews and is outside the room of this mini review. This review mainly focuses on the estrogen regulated immune signaling modes for establishing a favourable environment for the budding fetal parasite to bloom.

Estrogen signalling is mediated through two estrogen receptors (ERs), ERα and ERβ, transcription factors of the nuclear receptor (NR) family [17] coded by ESR-1 and ESR-2 genes present on human chromosomes 6 and 14, respectively [18]. Though the modus operandi and affinity for estrogen are same, the concentration of estrogen could vary. Also the estrogen receptors show diverse, even opposing effects determined by several factors such as varied expression in cells (including density, distribution, ER type), homodimerization or heterodimerization of the receptor, recruitment of specific coactivators/- repressors, physiological or pathological states etc. Estrogen reigns on all the immune cells, including of the innate immune system (dendritic cells(DC), neutrophils, natural killer(NK) cells, macrophages/monocytes) and the adaptive immune system (T and B cells) and almost all of them express ERs [19]. Table 1 details the type of ERs present in the each immune cell type, the functions regulated by estrogen and the genes involved in the regulation. Several reports of the presence of estrogen receptors in the thymic epithelial cells suggest that thymus is a target organ for estrogen [20]. Dynamic remodelling of its structure occurs after estradiol treatment and varying estrogen levels can alter thymic hormone output [21]. Estrogen treatment led to the induction of a novel subpopulation of regulatory cells, CD45dim VLA-4+ in spleen and CNS in case of EAE, which also occurs naturally in pregnant mice. An estrogen regulated escalation in expression of Foxp3 and CD4+CD25+ treg cell expansion was recently reported [22]. In addition, increased repressive treg activity was established in pregnant and estrogen treated mice [7]. The transcription factors AIRE, the auto immune regulator, functions in clonal deletion and FOXP3, the Forkhead protein3 helping in Treg cell selection, plays central role in toleranceinduction. FOXP3 and AIRE are closely linked molecules having key functions in self-tolerance [23]. Studies in ER knockout (ERKO) and Programmed Death-1 (PD-1) knockout mice showed treg suppressive activity. At the same time, ER knockout mice also showed a reduction in expression of PD-1. Estrogen can also induce expression of PD-1 in CD4+CD25+FOXP3+ cells [24]. Estrogen was shown to directly induce IL-10 expression by tregs [25].

Table 1: Type of ERs present in the each immune cell type.

miRNA biogenes in immune cell is under estrogen gear

miRNAs do help in successful placentation and immune modulation during pregnancy. They are present in all placental immune cells and uterine milieu during pregnancy. Fascinatingly, the miRNA processing and expression is under ovarian steroid hormone control [26,27] and estrogen directly controls miRNAs via binding through ERα and amending the group of cofactors hired, either activating or repressing their transcription. Estrogen can circuitously alter miRNA maturation by modifying the miRNA biosynthesis and transport components viz., Drosha, Dicer and Exportin [28,29].

Signaling by ER could be ligand-dependent or -independent determined by the level of estrogens, activation state of cell, the type of cell and the local environment. Several regulatory factors, comprising chromatin-remodelling complexes and several co-regulators influence the transcriptional activity of ERα. ER enrols Co-regulators into the promoters of target genes through protein-protein interactions and classical pathway is initiated depending upon the receptor stability, types of co-activators and co-repressors. As the proportion of these proteins is cell-specific, estrogen can regulate extremely diverse functions in various tissues of the same organism. Post translational modifications of ER also contribute specificity of biological functions such as acetylation enhances DNA binding activity whereas nitrosylation reduces it; ubiquitination degrades ER while myristoylation and palmitoylation corresponds to membrane signaling [30]. Our work on identifying estrogen receptor network in uterus during window of implantation (WOI) spotted out the established interacting partners of ERα viz., CREB binding protein (CREBBP), Forkhead box protein A1(FoxA1) and Histone H2B [31]. We could also identify CrkL as one of the interacting partners of ERα in the nucleus during peri-implantation period of pregnant mice [32]. CrkL is a known adaptor protein in TCR signaling and has recently identified significant roles in B cell development and memory. Also CrkL act as a molecular shuttle in regulating NK cell mediated cytotoxicity [33].

The decidualization process which is controlled by estrogen and progesterone is one of the decisive factors in transforming the uterine mucosa into receptive implantation site. The decidua consists of decidual stromal cells (DSCs), glands, blood and lymph vessels and immune cells. During the process, the endometrial stromal cells get converted to DSCs; attain specific tasks allied to identification, selection, and acceptance of the allogeneic embryo, with development of maternal immune tolerance [34]. DSCs modulate NK cells and antigen presenting cells (APCs) to suppress the immune responses generated to destroy the fetus. Epigenetic silencing of the promoters of chemokines by the decidual stromal cells also contributes to fetomaternal tolerance during pregnancy [35]. AIRE is known to be a challenger in studying immune tolerance and has established roles in central tolerance. A recent work from our lab has identified the expression of AIRE in decidua and has substantially proved the role of AIRE in decidualization [36]. Estrogen mediated down regulation of AIRE in thymic epithelial cells linking it to increased susceptibility of females to autoimmune diseases is also known [37].

Other tolerance inducers during pregnancy

Several factors are known to contribute to recurrent spontaneous abortion viz., autoimmune diseases, genetic aberrations, coagulation disorders, endocrine factors, environmental factors; most of them where the cause is unknown are attributed to unexplained category. Also anatomic factors like unicornuate, didelphic, and bicornuate uteri; infections like Listeria monocytogenes, Toxoplasma gondii, rubella, herpes simplex virus (HSV), measles, cytomegalovirus, and coxsackie viruses, are known or suspected to play a role in sporadic spontaneous pregnancy loss. Aside from HLA-G, IDO and TH2 shift, certain other factors also contribute to tolerance induction during pregnancy like lowered complement activity and also CD95/CD95-L apoptotic system is active along with TNF/TNF-R in eliminating the potentially harmful T cells. Placental Annexin II also contributes to immune tolerance by inhibiting proliferation of, and IgG/IgM Literature also suggest the infusion of IgG1 and IgG3 in low doses in patients with previous habitual abortions to restore idiotype-antiidiotype network and there by successful pregnancy [38,39]. Feto maternal microchimerism, a by-product of pregnancy, also adds to tolerance induction which has implications in auto immunity and transplantation [40].

Pregnancy is an instance where proteins play exceptionally new roles to accommodate the hetero allograft. The steroid hormones play in backdrop regulating the whole dynamic event with estrogen as the maestro (Figure 1). Understanding hormone regulated networks in immune tolerance during pregnancy would pave development of new therapeutic strategies to treat autoimmune diseases, graft rejection as well as treating infertility. 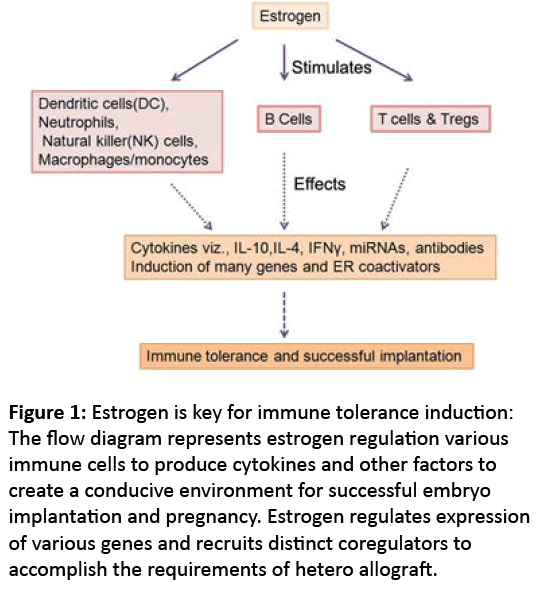 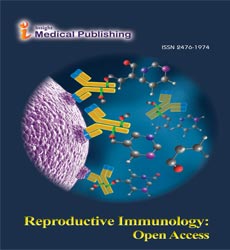